A Mom Kind of Morning

Some days I feel more like a Mom than others.

Today was definitely one of them.

It started in the usual way:

Get the kids up, make some breakfast, empty and reload the dishwasher and throw a load of laundry in the washing machine.  I tend to let things go a bit on the weekends so since its Monday it also meant I started picking up the various debris that accumulated in our genkan from the weekend’s activities.

And then it was a little more “Mom-ish” than usual.

Little things, like constantly reminding The Cuties not to look directly into the sun without their special, funky glasses during the annular eclipse that occurred this morning. 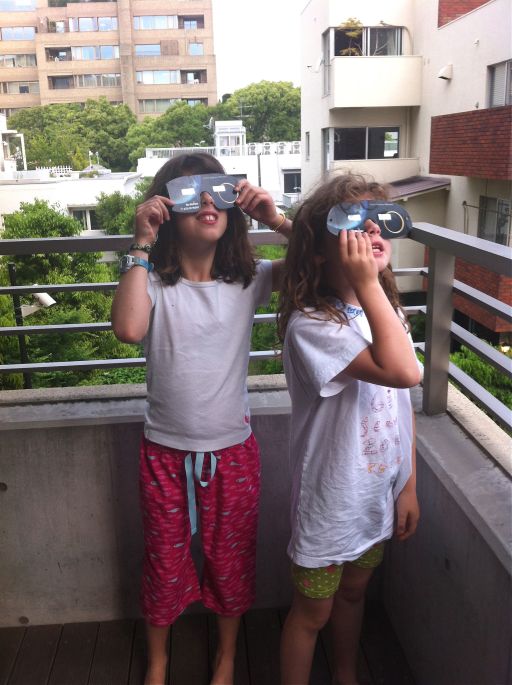 And while we may have just finished Girl Scouts for the year, I know myself, and I’m likely to stash the last of the patches away in some super secure storage spot, only to pull the sashes back out next fall and have zero idea where exactly that was!  So the safest bet seemed to be to sit right down and sew those guys on before they disappeared!

And after changing a load of laundry, I got down to some very serious Mom business {no, this did not involve wine ~ it was only 9 am, people!}.  Little Cutie’s lovies, known in the Felt So Cute Household as Night Night Bunnies were in need of major surgery.

Things were getting pretty critical.

{For those of you wondering why there are three identical bunnies, Little Cutie is my second child.  Having learned a very hard lesson with my first child and her solitary lovey of choice, the nano-second Little Cutie deemed this bunny her favorite, I ran out and bought two back-ups.  For many years, I secretly rotated and washed the bunnies so they would all wear and smell the same, and hid them far away from view.  But Little Cutie is a smart cookie, and by preschool, caught on to me and has forever more insisted on sleeping with all three.  I do, however, draw the line at traveling with quite that large of an entourage, and she somehow keeps track of who is who, and rotates who gets to go with us on our adventures!}

Each bunny got a little new stuffing and a lot of TLC from this Mama, as I stitched up all the holes I could find.  The fabric is so thin and worn in places that the “scars” are no longer neat and tiny and now look pretty Frankenstein-esque, but that’s OK.  I know Little Cutie; each and every time I fix a bunny, she kisses his boo-boos and tells him its OK and she loves him still.

3 Responses to A Mom Kind of Morning